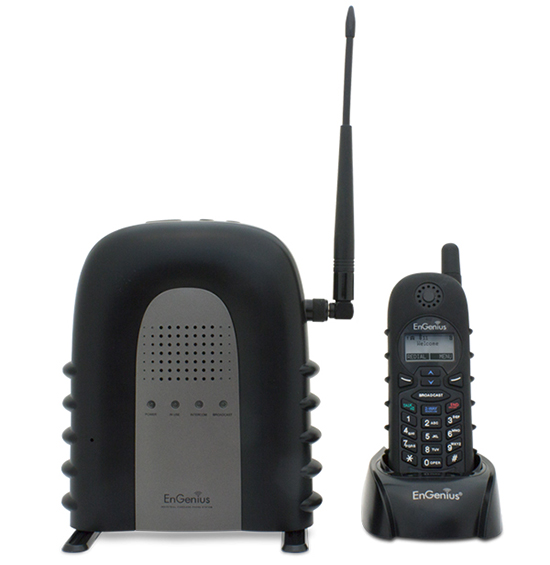 Does a DuraFon 1x support call waiting, and/or 3 way calling?

Yes, provided this is handled by the phone company or phone system it is connected to. You will need to press the flash key to flip between callers.

Does my DuraFon 1X have built in Voice Mail?

No the DuraFon 1X system does not have voice mail or an answer machine.

Does the DuraFon 1X handset have speakerphone on calls?

Yes and No. All phones built after Nov. 2007 with serial number 07A101340 or higher will now include this feature

Will my DuraFon 1X base units interfere with each other or other communication devices?

Yes, Base units and or the high gain antennas should be at least 30' apart from each other, and other electronic equipment for best performance and to reduce interference.

What security does the DuraFon system use?

The DuraFon Systems utilize Digital Spread Spectrum (DSS) with Frequency Hopping of 100 channels per second over 128 channels to maintain clarity and privacy. In addition, the base unit provides individual handset with one of over 65,000 random security codes to ensure that another system's handset is unable to link to another (non-related) base unit.

Can I answer a second call coming through a secondary base while on a call with an initial base?

No. The DuraFon 1X handset can only utilize one connection at a time. Outside of the Telephone service provider's "Call Waiting" the only way to answer a second inbound call is to be free to connect. If you need this capability, we suggest using our multiline systems (DuraFon PRO).

No. 1x is not compatible with any other system.

Does a DuraFon 1x support call waiting, and/or 3 way calling?

Yes, provided this is handled by the phone company or phone system it is connected to. You will need to press the flash key to flip between callers.

How different is the range using 2 way, or broadcast handset to handset, as compared to base to handset communication?

Two way and broadcast handset to handset are independent of the base unit. Range will be less than a typical incoming call or broadcast from the base unit, typically 25% to 50% less. If the external antenna is used on the base unit, the range difference will be even more noticeable. To maximize 2 way or handset broadcasts, use the long antenna on the handsets

When sharing a line with another non-Engenius phone, I can’t join in, they can’t hear me?

We added this feature to avoid howling or feedback in speakerphone mode when starting a new call. Simply press any digit to turn on the voice path. This feature is now on all Durafon 1x with speakerphone.


Why would EnGenius use 900Mhz, when this is an older technology compared to the newer 2.4 and 5.8Ghz cordless frequencies?

How do I register a new DuraFon 1X handset to a base unit?

To register a new DuraFon 1X handset to a base unit, please follow the following instructions:

Self Storage: The DuraFon 1X allows a facility manager to tour and maintain the grounds while manning the main office at the same time. This helps them to provide superior customer service and ensure the property runs at peak efficiency.

Hotel/Motel: 1X Systems allow hospitality staff to have immediate access to one another from anywhere within the hotel/motel property resulting in improved guest satisfaction and business efficiency.

Ranches an Farms: DuraFon 1X offers superior coverage for most every user that requires mobility within a large outdoor environment. Cut costs from Cell Phone usage and/or 2-way radio with the 1X you can cover up to 3000 acres of outdoor property.

Estate Homes:Traditional cordless telephones can’t offer the coverage that the 1X will provide. Offering complete coverage both indoor and outdoor and throughout the neighborhood.